The Cure For Pinks: Learn To Cure Pink Eggs

The Cure For Pinks: Learn To Cure Pink Eggs 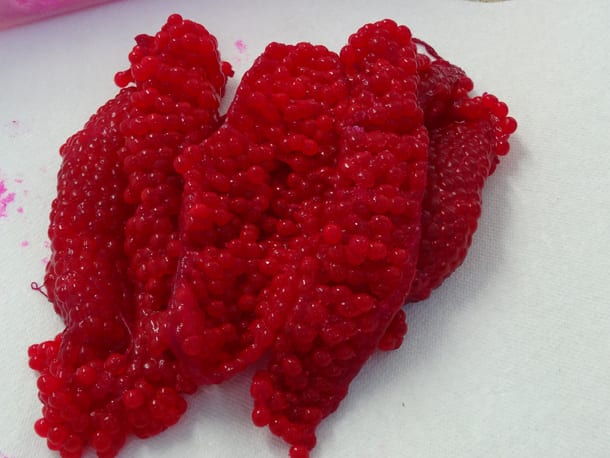 Every odd year we have a great opportunity in the Pacific Northwest. Pink salmon (humpies) return to our Puget Sound Rivers by the millions. Right now, this fall more than seven million our on their way. That equates to approximately 3.5 million reasons not to discard humpy eggs into the river along with the other entrails.

I see it every humpy season. Some anglers throw their eggs away and won’t even consider curing. These humpy eggs can be used to catch trout, salmon and steelhead anywhere in the Northwest. However, it’s important to cure these eggs properly. They must be cured differently than larger salmon and steelhead eggs.
Humpy’s are generally a softer fish than Chinook, chums and coho. They tend to produce a softer egg. What I mean by softer is their membranes, which hold the eggs together aren’t as strong. While many guys (like Pautzke pro Todd Daniels use Red and Pink Fire Cure on these eggs) I don’t like to use a strong sulfite based cure on them. Instead I prefer something that tightens the skein and cures the egg so it fishes well. I use BorX O Fire rather than Fire Cure. It gives me durable bait that I have confidence in.

There are a couple things that I like about humpy eggs. First, you don’t need to butterfly them open to get them to cure evenly. They lay flat and are wide open naturally. Second, they are a versatile sized egg, which allows them to be cured and fished in any egg fishery. 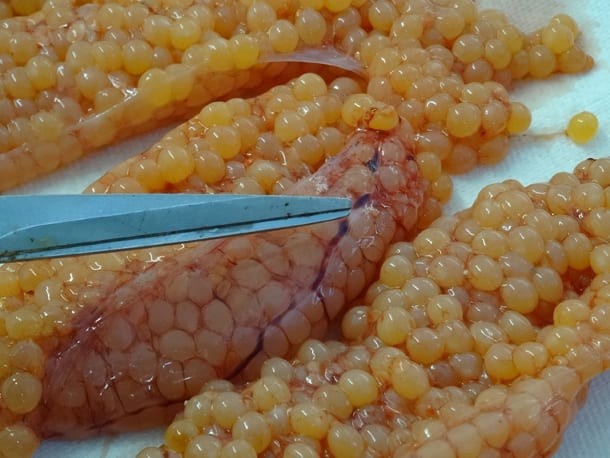 Just like any other eggs that you choose to cure you must remove the blood. The blood doesn’t cure rather spoils and leaves a foul smell. Using the side of scissors you can push the blood along the vein. By making a small incision with scissors it’s easy to wick the blood away with a paper towel. This method is quick and easy. Once the blood is removed the eggs are ready to cure.

For humpy eggs I use a wet brine. I simply mix the following into a large bowl.

Mix the contents thoroughly and pour it back into the jar. Be sure to mark your container as to what is in your mixture. It’s important not to mix it up with other containers of cure. 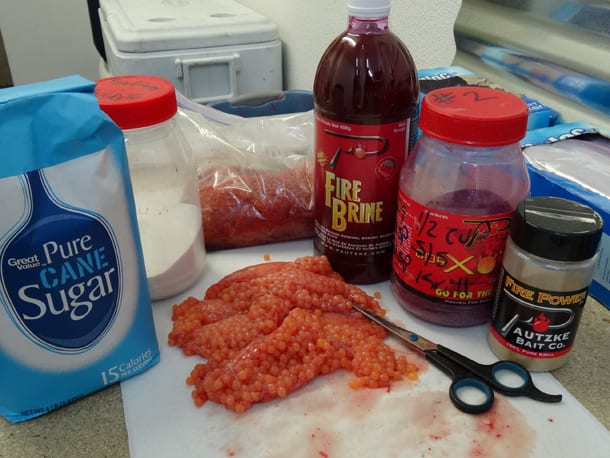 I am curing humpy eggs to fish for Chinook and coho this fall. Knowing that, I primarily use red cure, namely Red BorX O Fire, Red Fire Brine and Red Fire Dye. If I choose to cure some eggs for winter steelhead use the same mixture above without the sulfite. You may also choose to create eggs that are orange or natural in color. If that’s the case simple sub the color of BorX O Fire with Natural or Orange. 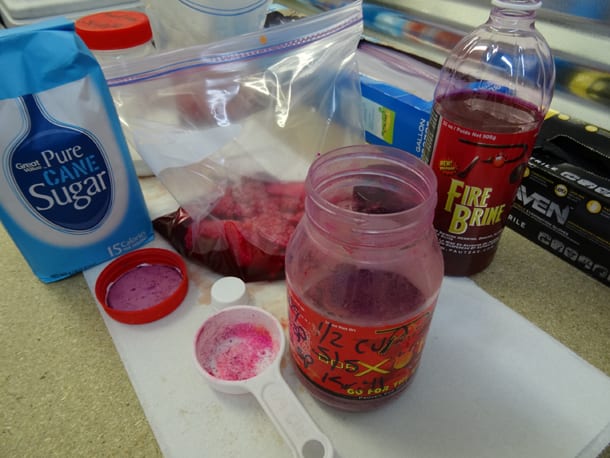 When curing 6-10 Humpy skeins mix one-half bottle of Red Fire Brine, a ¼ cup of the BorX O Fire mixture (described above) and a ½ tablespoon of Red Fire Dye. Then mix the contents in a gallon Ziploc and place the eggs in the bag. 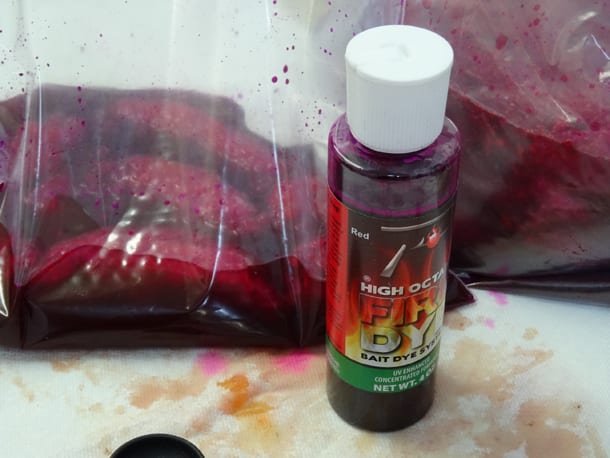 Let the eggs cure in the wet brine for eight hours. Then remove from the brine and place them in an open container lined with paper towels. The paper towels are for absorption. Now place the open container in the refrigerator overnight. After allowing them to drain in the fridge the eggs are ready to freeze for later use or fish now. 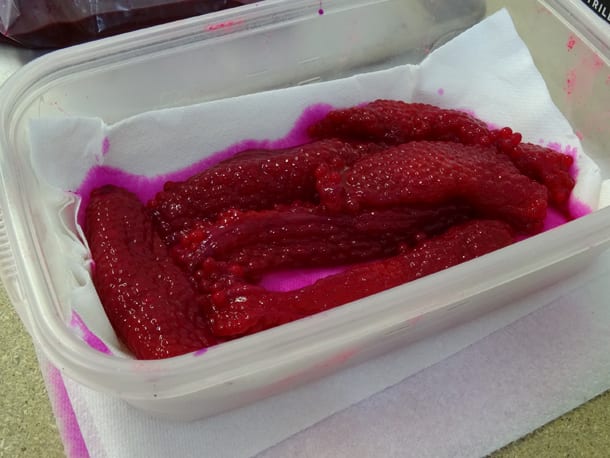 This process will produce an egg that is durable, looks great and fishes well. The next time you’re fishing and the guy next to you is about to toss his humpy eggs, let him know you’ll take every skein he plans to get rid of. These eggs will now fish great since you know how to cure them properly. 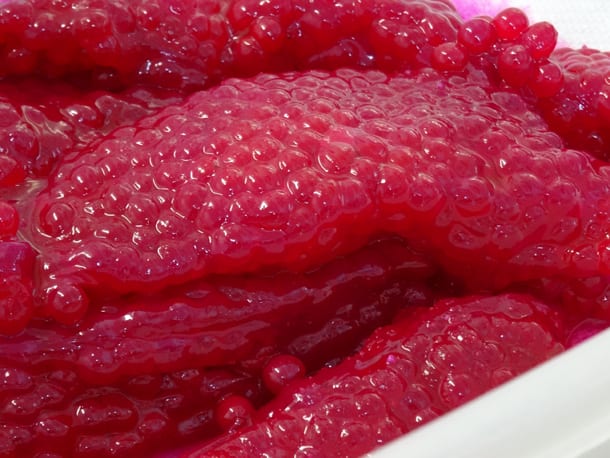 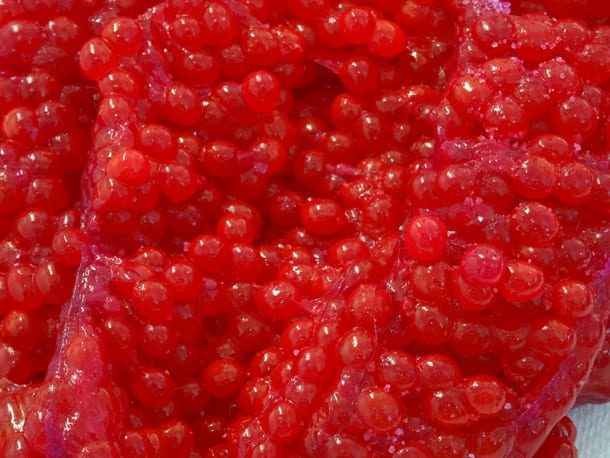