It is nearly the middle of April and the steelhead of the upper Great Lakes are likely just as confused as I am in terms of understanding Mother Nature’s current attitude. Two weeks ago we were enjoying double digit temps in t-shirts while the snow melted at unprecedented rates. Meanwhile days ago local watersheds were under flood conditions with residents of low-lying towns being evacuated by aluminum boats! Fast-forward to today and the temperatures are on the wrong side of freezing. Daytime highs have been well below seasonable average and the spring migrating steelhead of Huron and Superior put on the breaks.

Large Huron watersheds such as the Maitland and Saugeen see good pushes of steelhead throughout the winter. The first wave of serious spring pushes began with the rapid melt two weeks ago. Both systems blew out, but provide some awesome spring steelheading opportunities as the systems cleared. Smaller tributaries up and down the coasts of Huron and Georgian Bay have seen the early trickles, while the majority of flows on Lake Ontario have already seen significant runs. The catalyst for the on and off again runs is the massive variation in water temperatures over a short period of time. In my backyard, the local tributary had water temps of 45F just 10 days ago. Now the river temps are hovering just above freezing again! Mother Nature has turned back the season to old man winter, temporarily. 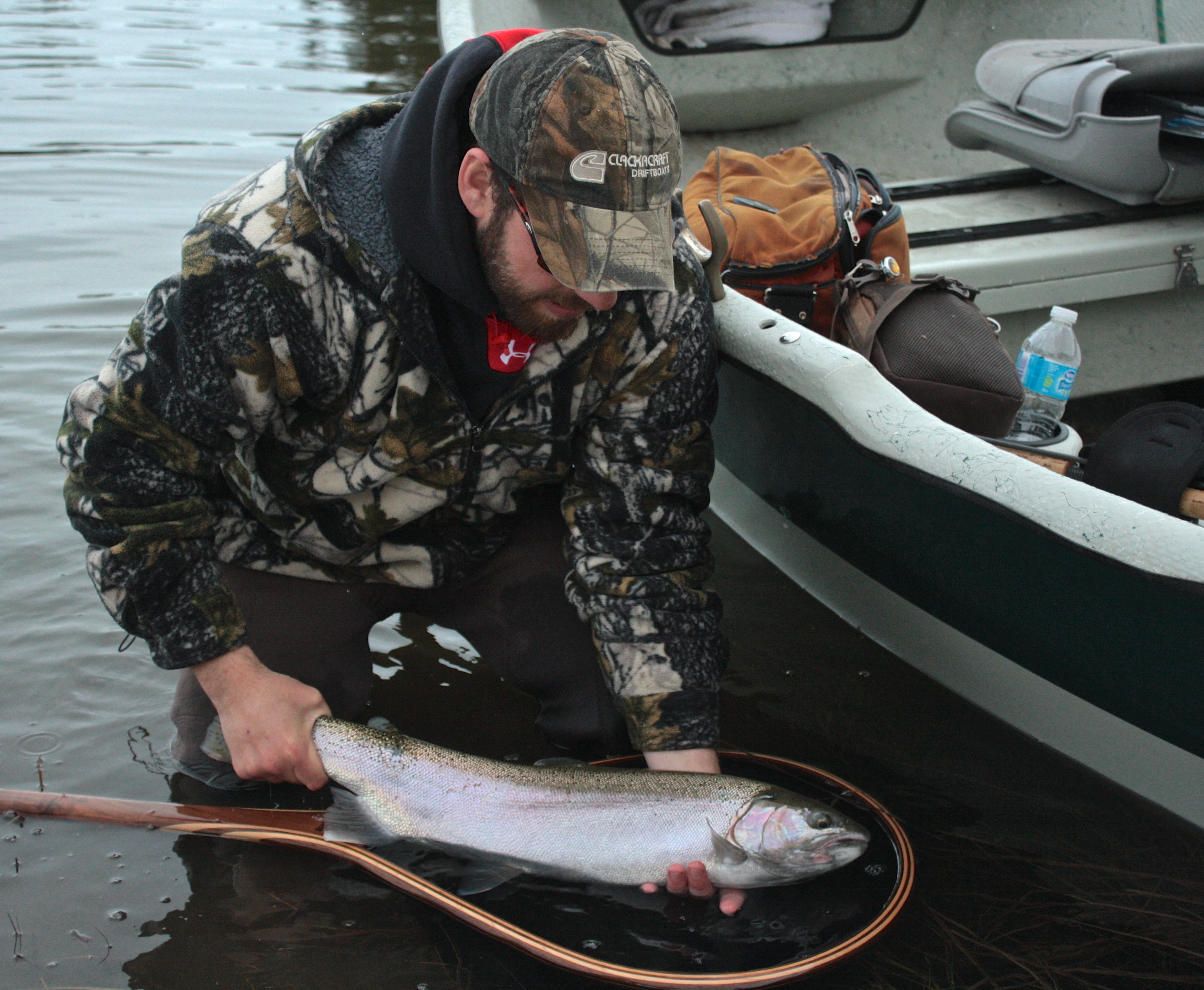 Normally (nothing seems normal as our climate seems to be in limbo), our steelhead run on Huron begins sometime in mid to late March based on flows and water temperatures. Our inland trout season in Southern Ontario kicks off in late April, when the middle and upper sections of most rivers open up to legal angling. This coincides with the later half of the run on good years, and sometimes a little too late in terms of fresh fish as late April normally means warm weather, morel mushrooms and wild turkeys!

Most years, I like to head north a dozen hour drive to the wild steelhead streams of Lake Superior during mid to late April. Superior’s run is usually two to three weeks later than the major migrations of Huron. However, the two feet of snow on the ground over the past week suggests another major freshet of melt water will set the stage for a well timed “opener” for Ontario anglers on Huron (April 23). 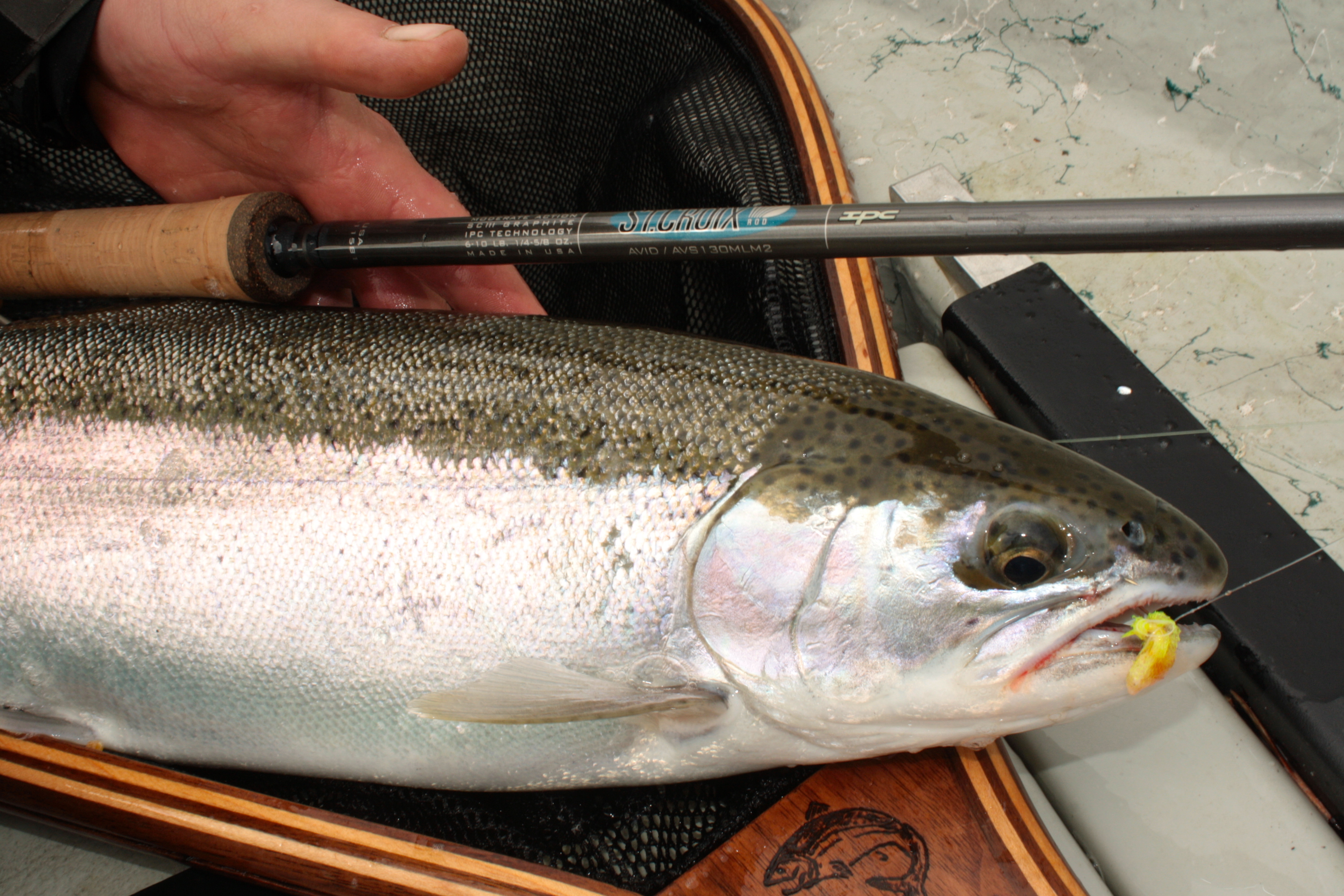 Anglers looking to connect with the largest push of Huron steelhead should be focusing on the lower end of major systems over the next week, as temperatures are expected to rise rapidly, and the remaining snowmelt will once again peak flows across the watersheds. As this water influx begins to drop and clear, the chrome will flow as well. 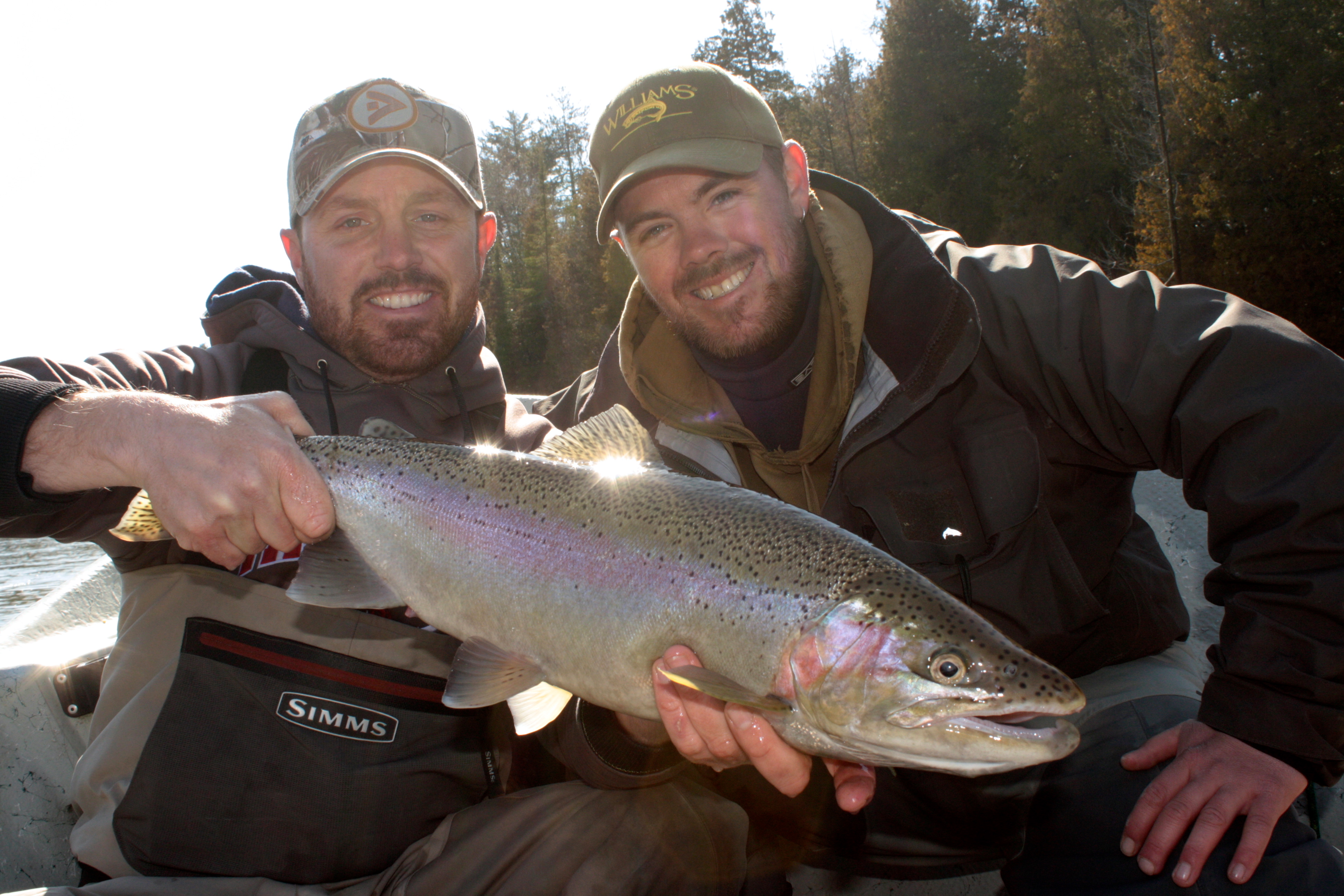 The best approach would be arming up with centerpin outfits and float fishing artificial and bait presentations alike. I like to run a 13-foot float rod (CTS, G.Loomis IMX or GLX, or Raven RPX) paired up with a proven centerpin such as an Islander Steelheader or Riverkeeper Frogwater, and match the combo up with Maxima 8 or 10-pound Ultragreen mainline. The working end of the system gets a Drennan Piker or Zeppler float (6 – 11 gram in size), a pile of Blackbird shot to cock the float, and a #10 Kamasan sedge hook tied to 20–30 inches of premium fluorocarbon such as Maxima or Phantom in 4–8 pound joined by a micro swivel. My number one spring bait choice is Pautzke BorX O Fire cured steelhead eggs.

For an ardent steelheader, running into fresh eggs may be an easy chore. If you are fishing often, chances are you are harvesting fish here and there and will be able to obtain fresh eggs. Fresh eggs are simply the best to cure. For the finest finished product, nothing can top a fresh harvested fish, bled to remove any blood, scraped from the skein as soon as possible and cured with a sprinkle of BorX O Fire. 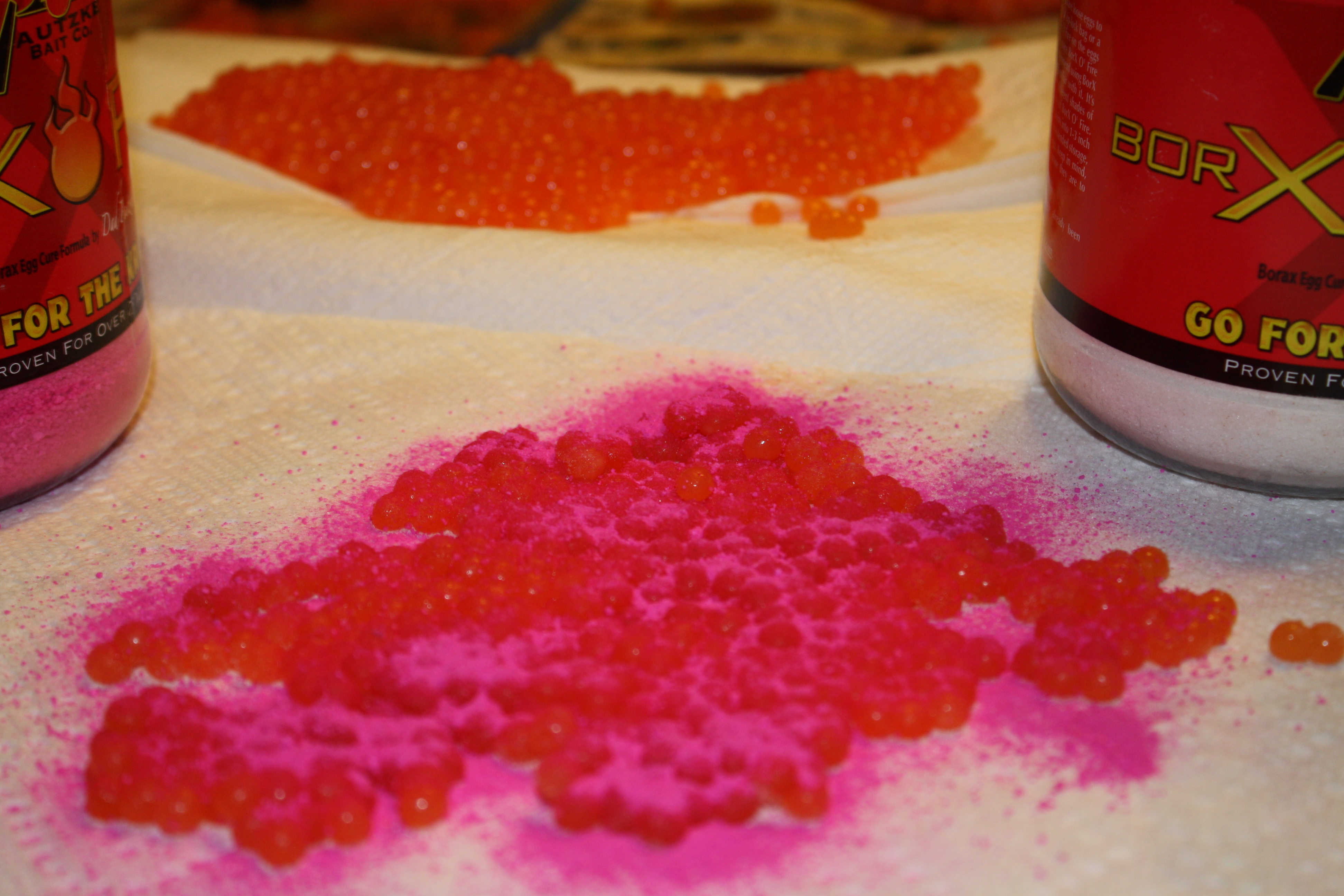 Since joining up with the greatest bait cure company on the planet (Pautzke) some seven years ago I have received close to 100 emails requesting cure tips from steelhead anglers across the continent. I love helping guys out when they are messing with bait cures to get a final product that maintains longevity both in the fridge on in the water. This isn’t a hard process, and can quickly be searched online through a video blog I filmed with Pautzke on a Huron steelheading adventure last winter: https://youtu.be/XF98h_zaW-8. The process hasn’t changed since I tinkered with the cures nearly a decade ago. Curing steelhead eggs with Pautzke BorX O can’t be any simpler.

For spring steelhead, my go-to presentation is 10-15 steelhead eggs, cured in Natural, Pink or Orange BorX O Fire, and tied in Blackbird Spawn Scarf (www.redwingtackle.com). The colour options are endless considering the scarf material comes in a plethora of colours, which in turn can be mixed with any colour of BorX O Fire for combinations the average steelheader cannot provide. These baits, fished under a float, are unstoppable for migrating spring steelhead. Another bonus is the fact these baits last far longer than uncured steelhead roe. Properly cured spawn has a significant shelf life, which results in less waste between trips, and less roe being thawed out without ever being fished. This in turn results in less fish being killed to supply good bait. 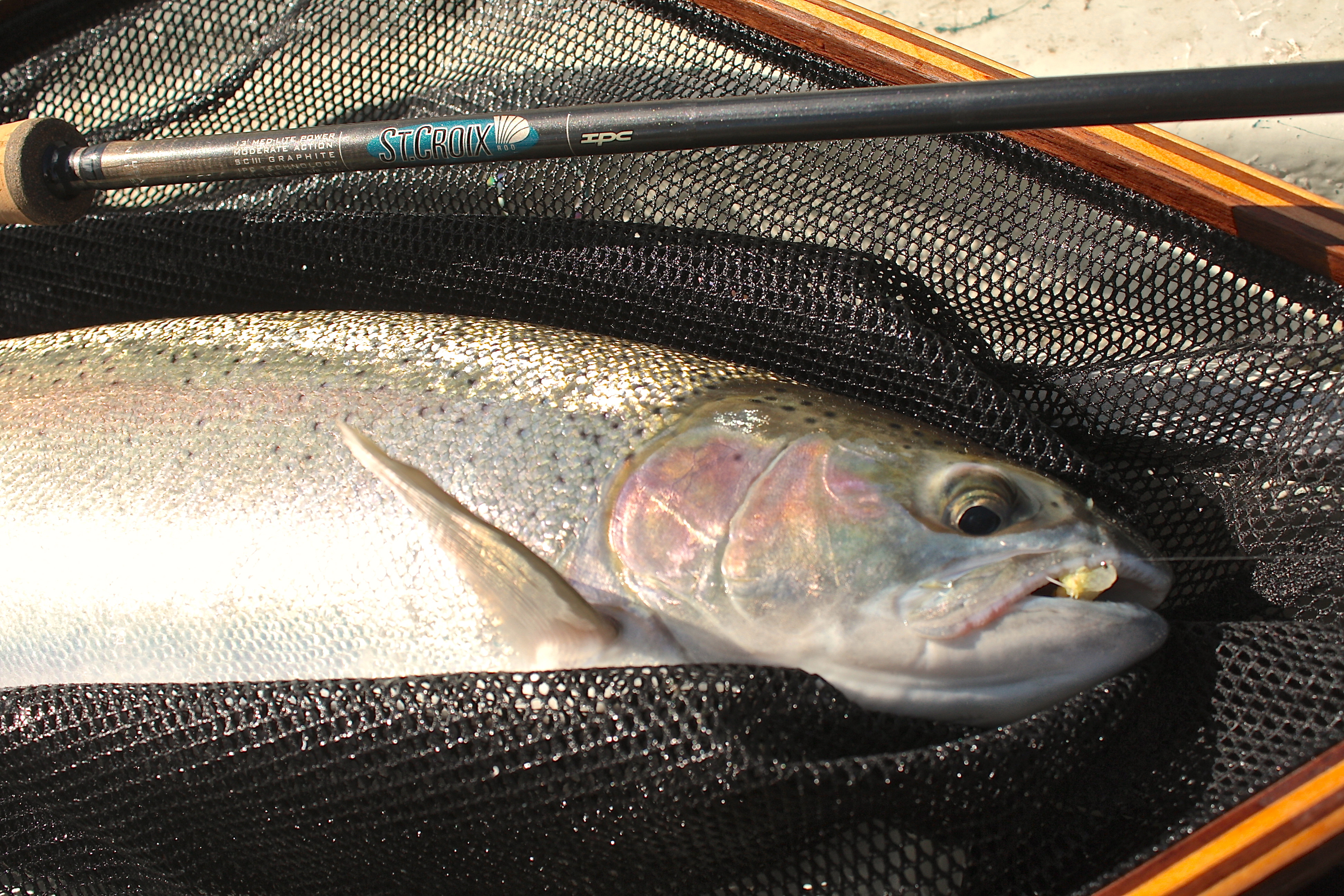 Time for me to sign off, as I am about to hit the chilly flows of Lake Superior in search of the hardest fighting chrome on the Great Lakes. The temperatures here are ideal for building ice and not spring migration, but I scheduled holidays over a month ago when the long range forecast had me dreaming of remote rivers full of fresh steel! Huron anglers will be back home reaping the rewards of the impeding thaw, and my limited cell phone rece